Valletta, soon after the establishment of British rule, began undergoing various significant changes. The Royal Engineers engaged upon improvements to the multitude of military structures left by the Hospitaller Knights, some of which by then were almost 250 years old. Many such alterations, carried out in accordance with the exigencies of the time, resulted in parts of the fortifications being made almost redundant, particularly those inland. Subsequently some of these walls and gun platforms were used for recreational purposes, sometimes also serving as burial grounds. The new administration coincided with the introduction to Malta of Neo-Classicism. As a style it was embraced by many of the visual arts, not least funerary architecture.

Almost immediately it became fashionable for prominent military and administrative personages to be laid to rest in prominent positions on the aging, lofty battlements of the city, their memory immortalised by means of some sculptural creation. Throughout the first half of the 19th century many were the monuments erected around the Valletta enceinte. Both the Upper and Lower Barracca Gardens were favoured locations for these memorials. Here all who promenaded along the planted pathways could admire the one-time importance of the deceased, sparing a thought for their memory.

Garden burials, a novelty in Malta, were a quintessential trait of English picturesque landscapes typical of the period. In 1826, General Frances Rowdon, the Most Noble Marquis of Hastings was buried on St. Michael’s Bastion not far from the erstwhile windmills. After a few years his tomb was embellished with the unusual yet graceful baldacchino structure which still stands. The surroundings were soon planted with trees and in time the former gun platform was transformed into a public garden named in remembrance of the governor. Hastings’ successor was Major General Sir Frederick Cavendish Ponsonby (1788-1837) whom although not buried in Malta, was also commemorated in this corner of Valletta, however in quite a completely different manner.

Ponsonby was made governor of Malta on February 15th 1827 after having distinguished himself as a “gallant and judicious officer” whilst serving in the Peninsular War and later in France with Wellington. At Waterloo he was wounded five times, at one point almost losing his life. In 1825 he was made Major-General and the following year sent to Malta to take on the governorship. His new post however was soon relegated to lieutenant-governor in a bid to economise.

His tenure is remembered for the establishment of a council of government which consisted of four Englishmen and three Maltese. This new body was the subject of some controversy even within English circles, some stating that it seriously lacked in representing true local interests. In 1830, Ponsonby’s cousin Captain Robert Cavendish Spencer died whilst in quarantine at the Lazzaretto. He was buried on a bastion just below Hastings Garden which soon was named in his honour. A grand obelisk was raised at Corradino in his memory.

The governor earned great esteem amongst the people by “his simple and forthright nature and the impartial benevolence of his administration”. In 1836 whilst in England, Ponsonby resigned his post and was succeeded by Sir Henry Bouverie. Sir Frederick died suddenly on the 11th January 1837 at an inn near Basingstoke (Hampshire) and was buried in Bournemouth. A contemporary account of Malta described the following:

“On the death of Sir F. Ponsonby … a monument was set up to his memory by public subscription; a proof, if proof were needed, that the people of Malta really valued and appreciated his government, and that the opposition to him arose, not from the people but from a few, selfish, unquiet, and interested individuals. Sir F. Ponsonby’s monument is a very conspicuous object, and presents itself to the view of the traveller who enters the Marsamuscetto or Quarantine Harbour.” 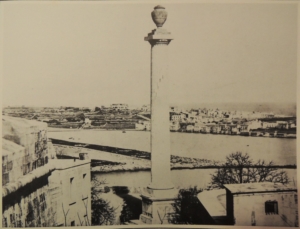 The original location of Ponsonby’s Monument was at the centre of the gun platform on St Andrew’s Bastion. Due to its prominent design and proportions it can be identified in many contemporary drawings and photographs. The designer of the towering column is unknown. Michael Ellul, an authority on local Neo-Classical architecture, describes it as “Malta’s tallest monument, a fluted Doric column rising over 23m surmounted by an urn.” He does not rule out the possibility that artist and architect Giorgio Pullicino (1779-1851) was its designer. It appears that the urn was a slightly later addition as a number of contemporary images attest, as was the main inscription which reads:

Clearly the original site was selected so that the whole ensemble would be visible from Strada Reale through Strada Britannica.

In 1864 Ponsonby’s monument was struck by lightning and subsequently demolished. It was decided not to re-erect it, but nonetheless, the plinth was later dismantled (November 1888) and reassembled at its present location. This move most likely came also as a result of the gun platform of St Andrew’s Bastion once again assuming its military importance and subsequently upgraded. On the base of the column, these words were added: 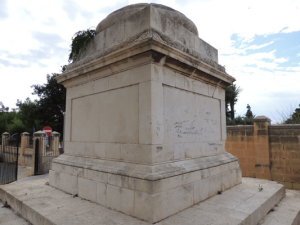 What happened to the rest of the column and the urn is as yet unknown. The remaining stump of the monument bears marks of past restorations as well as severe shrapnel damage most likely sustained during the last war. In 2013, Bank of Valletta sponsored the restoration of the plinth.

A traveler visiting Valletta a couple of years before this great memorial was struck down, observed the following:

“Valletta, is ornamented in several places by large monuments and testimonial columns, raised as tributes of public or private administration, in memory of persons, some of whose names would not otherwise be remembered. However these erections, especially the Ponsonby column, and that on Corradino Hill, give pleasing variety and relief to the outlines of some localities”

Ellul, M., Art and Architecture in Malta in the Early Nineteenth Century, in Melita Historica, 1983, 1-19.