Article which appeared in The Malta Independent

Some weeks ago, this newspaper carried an article about Ponsonby’s Column in Valletta, the main title reading ‘Lost Landmarks of Malta’. With this began a monthly series that will feature pieces of historically significant architecture which are now either ruined, completely gone, totally reconstructed or possibly never even having left the drawing board.

Readers might ask why start the tour with this British memorial, a largely unknown structure to many having perhaps debatable consequence? Well, the title of the series, for want of not being too protracted, should actually include the words ‘Lesser Known’. Valletta’s Royal Opera House and City Gate, St Elmo’s lighthouse, Birgu’s clock tower, Birkirkara’s Fleur-de-Lys Arch and other ‘famous’ monuments will not feature in these pieces as much has already been written and lamented about them. My aim is to focus on those entities which due to circumstances have been obscured and even in some cases forgotten. Whether it was war, the elements, neglect, vandalism, socio-economic exigencies, bad planning or shear wanton destruction that led to their disappearance, these unsung historic buildings, once landmarks in their own right, still form part of our rich architectural legacy, and like long-dead ancestors deserve at least to be acknowledged and at most be celebrated. But unlike inevitable human death, we can ensure that what is still surviving will be preserved for as long as possible, learning from the past, from the ghosts of these lost landmarks.

For those who appreciate Malta’s martial heritage, driving along the Coast Road from St Andrews to Qawra is synonymous with the uninterrupted chain of watchtowers erected by the Order of St John, three of which by Grand Master Martino De Redin in the 1650s. Few realise however that here existed another line of defence also raised by the Hospitallers.

During the early 18th century, after avid recommendations by a group of French military engineers, Grand Master Ramon Perellos, who was increasingly worried about the vulnerability of Malta’s aging defences, agreed to the construction of eleven of batteries along the north-west shores of the archipelago. One such entity was located on the low spat of land known as Ras il-Qrejten bounding the north side of the Qalet Marku inlet, itself dominated by the eponymous watchtower.

Standing approximately at the humped centre of the peninsula one is excused today for not thinking much of the crumbling ruins once the foundations of this battery. A harder look will reveal remnants of low-lying straight walls built with oversized masonry blocks. Evidence of a ditch beyond these walls is clearly discernible. The surroundings are littered with dressed stones and fill material once forming part of the structure whose outline is barely visible on present-day satellite images.

Old maps held in the extensive Public Works Department archives indicate that not so long ago this defence known as Batteria D’Orbeau assumed a polygonal plan with a raised platform and embrasured parapet wall once accommodating guns aimed out at sea. A rectangular blockhouse most likely stood at the centre housing the garrison, not unlike other examples such as Qala Battery in Gozo and Vendôme Battery in Armier designed along French standards of the time. Batteria D’Orbeau together with Ferretti, Westreme, Gironda and other counterparts, was named after a benefactor, most likely a French knight hailing from a wealthy family of whom little is presently known. An interesting document held at the National Library records the expenses incurred to erect the batteries and redoubts built in this period. The Batteria della Punta di San Marco (presumably Batteria D’Orbeau) is listed as being the twenty-second specimen from the start of the defence line at Bengħisa and having cost 1165 scudi. 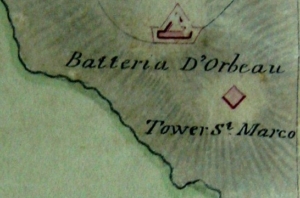 It is essential to distinguish between batteries and redoubts, the former being strategically positioned to command the mouths of bays and armed with cannon, whilst the latter usually located further inland along the shoreline, were intended to accommodate infantry which engaged in combat against enemy troops ambushing the beaches. In fact such a redoubt once existed not far from Batteria D’Orbeau at the Għallis edge of Ras il-Qrejten, indeed another vanished monument, sacrificed to make way for the Coast Road. The next closest redoubt is at the head of the Baħar iċ-Ċagħaq inlet presently being used as a café.

Survey plans dating to the first half of the last century still show the battery in good condition and being leased to third parties most likely for leisure purposes (as happened with many defunct coastal defences at this time). It is also the only one of its kind along this part of the coast for miles. During or around the Second World War the battery appears to have been severely mutilated and possibly readapted to serve some military use. Other wartime structures on Ras il-Qrejten still exist and on the ruins of D’Orbeau today there are two reinforced concrete rooms used by third parties which suspiciously look like military devices.

Unlike other counterparts, some of which will hopefully feature later on in these articles, something of this piece of military engineering still exists but is rapidly disintegrating. Further research together with an urgently-needed conservation management plan is urgently required. Batteria D’Orbeau forms an integral part of the remaining coastal heritage in this region and whilst we are fortunate to have a generous number of such Hospitaller structures still standing, to quote Dr Stephen C. Spiteri “… hardly any two batteries are the same” and therefore preservation of what remains of this unique monument is a must.